This mini-series collates three pieces written by Ophrys, our correspondent, committed choir member and nature enthusiast inside HMP Rye Hill. They were written, roughly month by month, over the course of April, May and early June, and track with great care the small changes in the natural environment and wildlife from within the grounds of Rye Hill. Even in this restricted space, great variety and joy emerge. You can find the previous episode here.

I often see things in the clouds, in the sky when conditions are right. I call some of these ‘cloud monsters’ because that’s what they’re like – fanciful beasts, improbable blends of things: “other worldly mixes”. I saw one recently that looked like a slipper but it was bent in a way that made it look like a car and with just a shift of the imagination it becomes a Formula 1 racing (car) slipper with a driver and a co-driver so it was a rally slipper not a racing slipper in fact.

Mad? Maybe, but I’m not alone. Shakespeare had Hamlet look at clouds and say to Polonius:

Hamlet: “Do you see yonder cloud, that’s almost in the shape of a camel?”

Polonius: “By the mass and ‘tis like a camel indeed”

Sometimes I see a cloud suggesting a single animal, like Hamlet, but not often. I see these mixes like the ones in the drawings I’ve made – and I’ve dozens of drawings, I could make hundreds! I have to ignore the monsters in the clouds that I often see and only draw the most extraordinary.

In the exercise yard I am one of the very few, maybe even the only one, who looks upwards. I look at the sky. It is the closest to freedom I can attain. I once loved walking in the countryside, on the downs, by the coast, over fields and meadows; in Rye Hill I don’t have that luxury but I have the sky, which I appreciated always and do so even more now. Looking at the clouds – the weather – takes me to another place as it were. I get lost in the sky. Marcel Proust says it so well in his epic work, ‘In Search of Lost Time’, when he writes:

“Although it was simply a Sunday in Autumn, I had been born again, life lay intact before me, for that morning, after a succession of mild days, there had been a cold fog which had not cleared until midday: & a change in the weather is sufficient to recreate the world and ourselves anew.” 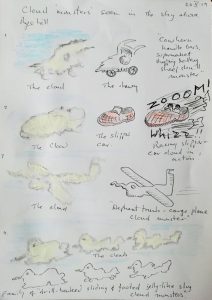