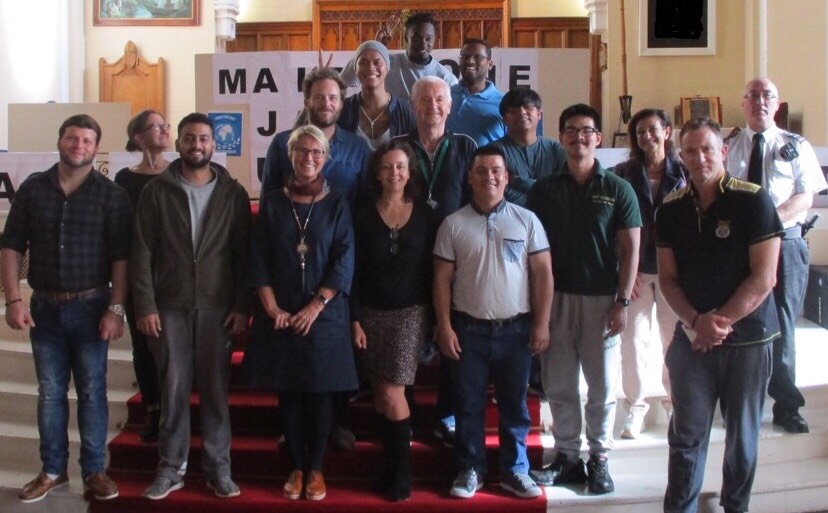 “Life is strange”: A Concert for UN World Day of Peace

This piece is the first-person account of a watching audience member. The photo above, of the ‘Maidstone Jammers’ and the Beating Time team, is a very significant one – the first in 4 years working inside!

“Life is strange”, Fernando remarks to me, smiling thoughtfully in the light of HMP Maidstone’s central hall. Sat amidst a large crowd of current inmates, prison officers and an audience contingent recently arrived from ‘outside’ – as we watch the ‘Maidstone Jammers’, a group of 10 nationalities, from the Gambia to the Philippines take to their feet and begin a special concert to celebrate UN World Day of Peace – I was inclined to agree with him.

For Fernando, though, the significance of his statement is truly extraordinary, and emerges as a source of surprising hope from a place of personal agony and devastation. As he proceeds to tell me, one of the choir members stood on stage in front of us was the fiancé of his daughter, Maria. Almost a year ago, the couple were involved in a high-speed car accident and she was killed; it was Nick, Fernando’s future son-in-law, behind the wheel and at fault. And yet, almost unbelievably, Fernando and his wife Elizabeth – battling the emotional turmoil of blame, anger, and despair – have supported Nick through his trial and subsequent court processes. They have visited him in Maidstone prison every week since his sentence started, and in that short time Nick has joined Beating Time’s choir, advanced rapidly on the piano and begun to write his own songs. One of these, which he performs on the piano as a solo, with Fernando and Elizabeth looking on, agonisingly addresses itself to their lost daughter. We are sat here together because Elizabeth got in touch with Beating Time to say thank you, realising that what was sustaining Nick in prison was both his ability to express himself freely in music, and the friendship and dignity he found in belonging to the ‘Jammers’.

In Fernando’s eyes, Nick’s sudden burst of creativity and personal transformation – from shy guy in a choir to singer songwriter at the piano – is no surprise. He speaks of what Nick has achieved in prison with a visible paternal pride, but recognises it as just one example of a general truth about the potential of those serving custodial sentences. “In the extremes of life, at what might seem the end of your life, you get from a person something…”; Fernando is left shrugging his shoulders at the prospect. It is this ‘something’, the extraordinary possibilities to be glimpsed in the cracks that prison opens up in people, the belief in the future of individuals because of their extremity of circumstance and capacity to grow, that permeates the atmosphere of the concert today. In the words of a recently released former Maidstone inmate – a creative stalwart of the ‘Maidstone Jammers’ who was crucial in organising this performance before his release – prison can crystallise “the gift of desperation”, the powerful impulse in individuals at their lowest ebb to transform themselves and those around them.

Entering a prison, even as a visitor, heightens your sense of boundaries in a way that few experiences can. A man behind a glass screen, voice distorted through an intercom, receives belongings (through a double-sided, open-shut metal box) and locks them in a numbered compartment. Our group of ‘outside’ attendees are led through gate after gate – unlocked, re-locked – between high grid fences, under bunched coils of razor wire. By our feet, through barred porthole windows, prisoners sit across tables from their own visiting family. When we arrive at the concert hall, this pervasive distance is quickened by an unexpected jolt of actual fear: as we enter, I am surprised by the faces of forty prisoners watching from the back rows. We take our seats, somewhat awkwardly, in separate lines nearer the front.

It is shocking how intensely I find myself reacting to the presence of these people, ‘the prisoners’, seated behind me. A sense of threat, expressing itself in my mild panic, emerges from a sudden internal wash of violent stereotypes and ludicrously imagined TV scenarios. As much as distance from the prison population is physically enforced, an accompanying mass of popular narrative ensures that, in our minds, they exist at a still greater remove – as hostile, dangerous, alien beings. This underlying pre-judgement and its attendant emotions of fear and mistrust are usually hidden but culturally ingrained.

When the concert starts, though, all of these unsettling biases begin to evaporate. As the entire audience is coaxed (read: coerced) into some vocal warm-ups, any residual tension quickly feels absurd. And when the choir stands to begin their first song, ‘Bridge Over Troubled Water’, prisoners and visitors alike fall into a shared, stunned silence, equally affected by what follows. This silence is broken only by one thunderous round of applause, and I am left racking my brains for another activity that could have so powerfully reinforced the common humanity of a room in just under five minutes.

Midway through the programme, Jane Hanson – founder of the ‘One Day One Choir’ initiative, which connects a global network of choirs in song for ‘Peace Day’ – offers the inspiring reminder that the guys performing are “united with 1 million other people around the world all singing together for peace”. Such a grand vision, however, expresses itself most strikingly in the small details on stage before us: the choir’s impossible-to-contain grins during a ‘Don’t Worry/One Love’ Bob Marley medley; the growing cheers and enthusiastic clapping from those behind us in the audience; the covert smiles and nods of encouragement amongst the other singers as Nick starts his solo, and their genuine elation when he makes it to the end.

The concert is woven together by these creative and spontaneous moments that each manage to break down and reorganise the initial boundaries of the room. The hummed audience accompaniment during ‘Lean on Me’ is followed by a whole-room rendition of ‘Happy Birthday’ (to Elizabeth) whilst, later, a smaller group singalong leads to half of the choir members taking over on the piano for an earnest rendition of Ed Sheeran’s ‘Perfect’ in three-part harmony. For Anton, a South African who fought in Afghanistan, a subsequent Bob Dylan refrain “any day now, I will be released” is especially moving: at the song’s end, he stands up and informs us that his sentence finishes the following day. Each song brings with it a new story, and a fresh sense of release and optimism – and it’s a feeling that is infectious.

“Be a voice for your community”, urges the Maidstone governor, admiringly addressing the prison singers near the concert’s end. At a broad level, there is no doubt that the choir represents the best of a ‘foreign nationals’ prison community: a diverse range of individuals who, despite facing deportation even when they are eventually released, find purpose and direction in relationships with each other. But, crucially, it is this group’s own sense of community that makes a ‘voice’ possible at all. Jan, a Hungarian member who joined just a month ago, excitedly informs me afterwards of the progress made by another Bolivian singer, who performs his own song, entitled ‘Peace’, on the guitar today. “He did his first solo three weeks ago”, he says, shaking his head, “and now look at him!”

The choir’s leader, Dom, attributes part of this shared self-belief and rapidly formed mutual trust to the kind of emotional engagement that singing can generate. He describes how “a lot of the guys who come to singing group say they find it emotional, bringing up feelings they didn’t expect” but also, more importantly, how “the support of the group allows them to feel safer to feel – and be seen feeling – their response to the music. Nothing needs to spoken about this experience, the singing speaks for itself.” An unfortunate by-product of the unspoken openness and confidence that singing breeds is that any general statements about its influence are bound to fall short of the experience itself – sounding clichéd, crude or irretrievably after-the-event. But, undeniably, part of the power of what takes place even over the course a one-hour concert is the very thing that makes it difficult to put into words.

As a group of prisoners sing together – and the audience sings with them – the room seems united, a fundamental respect blossoms, and all are changed by its conclusion. The singing does more than simply release emotion, or build confidence, as all who were there can vouch for. Beyond this, it becomes a space, in an environment of isolation, anxiety, and hopelessness, where a group of people can imagine a future that might be different, and are able to sense, vividly, the part they might play in it.

Previous Post
‘A Performance at Visitors’ Day’ – Henry
Next Post
‘There’s a Place for Us: A busy few weeks on the Hill’ – Ophrys
Menu