‘Locked in this Prison of Seclusion’ – OC

This is OC’s latest poem, written following encouragement from Benjamin Zephaniah no less! It is a brilliantly mangled mishmash of thoughts, descriptors, feelings, actions, almost-characters, places barely held together in writing. We are confrontingly introduced to the “complexity of mind” in which he finds himself.

You can access his previous work here and here.

Locked in this Prison of Seclusion

Cruel to be kind and kind to be cruel

Penance and servitude in the belly of the Beast.

Alone in purgatory, den of iniquity.

Vexatious to the spirit, destroyer of the soul

This my friend is the nature of the Beast. 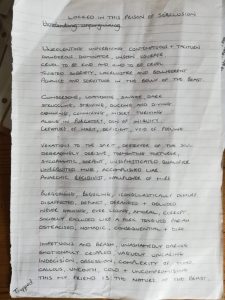