A few weeks before Christmas, Beating Time’s choir (the ‘Maidstone Jammers’) at HMP Maidstone gave a concert entitled ‘Power Ballads’ – with a programme made up of songs with personal importance to those in the group. After the concert, having only sung with the Jammers for one week, Craig penned a beautiful note about the impact that singing was having on his time inside: it has “made my sentence worthwhile and that really matters to me”.

In the audience for that concert was Elizabeth Jiminez, who has recently become Beating Time’s ‘Reconciliation Ambassador’ and whose son-in-law is part of the choir. She gives a spirited account of the performance and focuses on the passion and purpose that thrives in the atmosphere around her – both in the audience and on the stage before her. 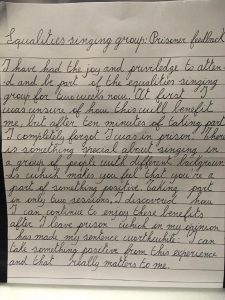 I have had the joy and privilege to attend and be part of the equalities singing group for two weeks now. At first, I was unsure of how this will benefit me, but after ten minutes of taking part I completely forgot I was in prison. There is something special about singing in a group of people with different backgrounds which makes you feel that you’re a part of something positive. Taking part in only two sessions, I discovered how I can continue to enjoy these benefits after I leave prison, which in my opinion has made my sentence worthwhile: I can take something positive from this experience and that really matters to me.

How to define passion?

Experiences gives us an insight into how to identify the meaning and explanation of concepts that sometimes are hard to describe.

Today, passion gained a new meaning for me. I’m defining passion by the watery eyes of the Beating Time team in the audience, and their vision to improve the lives of people imprisoned and now fighting for their mental health. I watched them looking proudly at the men in the choir onstage, bravely singing songs that remind them of better times and provide new ways of expressing how they feel after the chaos. The stage becomes a place of opportunity, a place of open doors – the chance of a new and better life.

I also see the men: how proudly and valiantly they defeat nerves to present their best performance. I see how they smile and relax after every applause and how it translates. You see, for them, that applause means “well done”, “you are amazing”, “we are proud of you”, even “we love you” – words and phrases some of them have never heard. How I wish you all could see what I saw: men called criminals completely transformed after singing the first song, presented with another version of how they are perceived and the potential they all carry.

We were so gripped by the singing that the concert felt short; it was like no one in the room wanted the songs to stop! Dom – the choir director – and the singers obliged by choosing another few pieces that they impressively improvised for us, and the air was filled with a desire for more.

The audience were eager to get to know these men, their stories, their dreams. We wanted to connect, to establish a bridge between the outside world and them so that help is at hand as soon as it is needed. I found myself walking around the room looking for the lonely ones, men that could not speak the language* but wanted to be part of such an experience. Men who haven’t been able to share their story and wanted someone to listen.

I’m sure the clock was running faster than usual. I wanted to talk to everyone, I wanted to let them know that I was proud of them too, I wanted to echo the passion I see in this amazing work, not just to make a difference but to ‘be the change’. What a privilege to be alive for such a time as this! And the opportunity to stop the terrible cycle of reoffending and depression.

Editor’s Note: as Maidstone is a prison for foreign nationals, for many English is not their first language.

A few weeks later, during a final Jammers Christmas practice, Elizabeth and the rest of Beating Time arrived at Maidstone with some Christmas cheer – in the form of gift bags – to support the guys and thank them for their commitment! 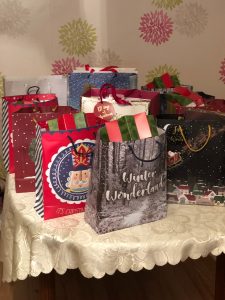