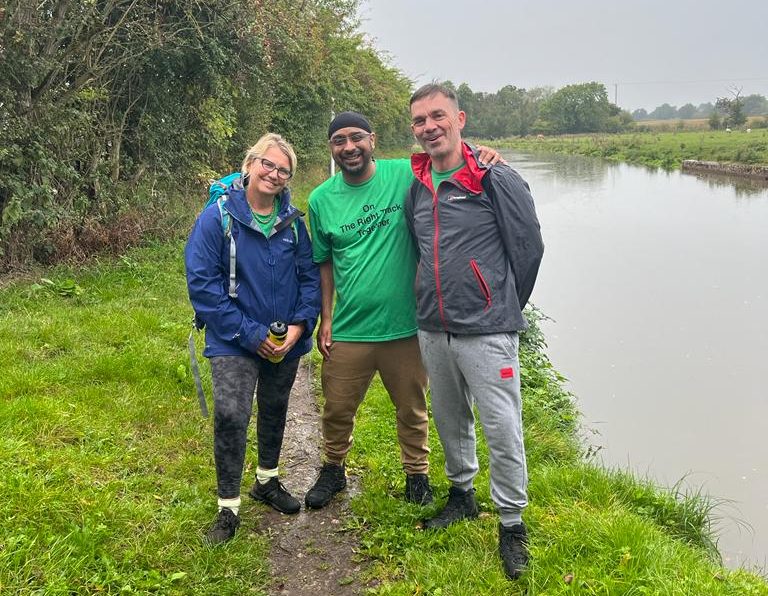 The Right Track: helping people who have served a sentence get back on track

The origins of our post-prison employment programme, Inside Job, and the motivations behind The Right Track fundraiser
September 23, 2022

Beating Time CEO Heather Phillips is fiercely passionate about improving the prison system. Heather knows that for many people serving prison sentences, securing a good, honest job represents the first step in moving forward with their lives. But they still face negative stereotypes and struggle to find employment upon release.

Figures show that having a job reduces the likelihood of reoffending by half. Currently, reoffending costs the taxpayer around £18 billion per year. When you divide that by the number of people we release every year, that is over £500,000 per person.

Other European countries are closing prisons (Germany imprisons half the number of people we do). Our crime rate has been falling for years (with the exception only of Cyber Crime). We live in a safer society than ever before. So why are we building 20,000 more prison places at a cost of £60 billion to build and run?

“We have dismantled too many of the services that supported people and stopped them getting into crisis, mental health services being an obvious example. It also suits politicians of all persuasions to convince us we are unsafe and tell us they are protecting us by spending huge amounts of money building new prison places.”

Heather thinks the language used about people who have served a sentence is part of the problem.

“Words like ‘prisoner’, ‘ex-offender’, ‘offender’ or ‘prison leaver’ obscure everything else about the person. We work with people who are doctors, teachers, parents, musicians, builders, and runners and are also serving sentences- it’s hard to believe in someone’s strengths when they are introduced to you as an “offender”, says Heather.

“The media and Government all talk in these terms and it creates fear and stops us from seeing the real people we are talking about.”

Heather & Jon – a match made in… prison

Heather spent a large proportion of her career as a Corporate Finance Partner in a London media law firm, specialising in children’s TV.  She raised the money for Bob the Builder and bought Barney the Dinosaur before moving into business and then setting up Beating Time in 2014.

Beating Time was originally set up to create prison choirs to support mental health and create a sense of community for people serving sentences. After covid restrictions halted their initial programme, Heather knew that something else had to be done to improve the lives of the prison population.

Heather had already piloted an employment service in HMP Birmingham with Jonathan Floyd, who was serving a sentence for drug importation at the time. Jon had initially wanted to set up his own recruitment agency when he was released, to support people who had served sentences. As he still had four years left to serve, the charity, with collaborative support from KPMG, decided to set it up in prison and so Inside Job was born.

Jon is from Manchester. He went to a selective school and, after a rocky start, set up an estate agency. Personally and professionally, things went wrong for Jon after the 2008 financial crash. He looked for salvation in the wrong place and started distributing narcotics. In 2015 he was sentenced to 15 years for conspiracy to import class A drugs. He pleaded guilty and has served the custodial part of his sentence.

Jon deeply regrets the harm his actions have caused, on lots of levels, to lots of people. However, he has spent the custodial part of his sentence well. He was a Listener for the Samaritans in prison. He has also developed the Wellbeing Navigators (people who are trained to provide mental health support, prevent suicide and self-harm and help people access help) within prison, alongside the Mental Health Lead in HMP Birmingham. It has been so successful that it has been supported by the Government and written up in a recent whitepaper.

“I regret things I’ve done in the past, but I can’t change them. I have, I hope, used my time in prison as well as it can be used. I plan to continue using the time ahead of me to help people who have served a sentence turn their lives around and be a better man. I’m hoping my friends, family and colleagues will help me do that,” says Jon.

Jon was eligible to go to an open prison two years ago but chose to remain in a closed prison during a pandemic to develop Inside Job.

The origins of Inside Job

After several false starts involving many potential candidates and employers (and then a global pandemic), Heather and Jon optimised the model and brought in co-director Bally to be the consultant on the outside, keeping the flow of employers coming through.

This became the Inside Job model- training people serving their own sentences to find the best candidates- preparing candidates for job interviews in prison- employers interviewing in prison, resulting in real job offers.

It was this peer-led model that was a real game changer.

“A fear was that Jon was a one-off. But we found lots of fantastic people to be recruiters, an IT specialist, a doctor, a traveller, an aeronautical engineer, a teacher, an electrician, all of whom had earned the trust and respect of their peers,” says Heather.

“Lots of people I come across in prison want to work and contribute to society but do not believe they will be allowed the opportunity to do so. For a significant portion of the prison population, societal exclusion starts long before they step foot inside these walls, so supporting them on the inside can dramatically improve their success on the outside,” says Jon

“Many different people find themselves in prison for very different reasons. If you are an employer looking for candidates to fill job vacancies, it is hard to know how you go about finding the people that are committed to rebuilding their lives and securing employment when they get out. That’s where we can help. Only people living on the wings know who is serious about working because they spend day in, day out with them.”

The team has quickly grown from Heather and Jon to Bally and Shelley, who support in finding employers and organising interviews. Caprice, a former prison officer is due to join in 2022 and they have already facilitated over 300 job offers, with over 80 employers on their books.

“We are getting around 50 percent of candidates into work. The national average is around 20 percent,” says Heather.

“Given we have only been able to work in one wing of our prisons until very recently because of Covid and have only had two full-time members of staff, it’s quite remarkable. The entire Inside Job team have themselves served a sentence or worked in prison, which means everyone is extremely passionate about what they do.”

The system works for employers too:

“Working with Inside Job is a real partnership. You could not find a more dedicated team. Their candidates are some of the best I have come across. They are engaged, knowledgeable and well-matched to the vacancies we have and always impress me and my team at interviews.  We know we won’t be wasting our time meeting with an Inside Job candidate,” says Kim McGinty, CSR Manager at VGC Group, a provider of skilled labour to the UK’s infrastructure sector.

“We just had our first surgery in HMP Hewell and I was really impressed by how prepared and engaged the candidates were. I interviewed five people and offered second interviews to four candidates at our local depot upon release,” says Karen Clifford, Head of HR at HSS Hire, a national supplier of tool and equipment hire.

“I was in the room when Jon mooted his idea. I’ve since seen Beating Time develop and invest in it. Two months ago, my firm hired one of the Inside Job recruiters from HMP Hewell into a role at KMPG. Heather and Jon have proved that people closest to the issue are themselves the solution if they have the right support.”

Of course, there are still some challenges when it comes to employing people who have just been released from prison. A job offer is not ‘job done’. Often people’s problems start on release – many come out to broken relationships, debt, homelessness and other issues that seem insurmountable.

“People need the same relationships they have built inside to accept help on the outside. The beauty of Inside Job is that our work does not stop at the gate,” says Heather.

“Our team stay on candidates’ side in the community until they are in work. Sometimes it requires sorting out training courses, ID and right to work documents. Other times it means getting a candidate several jobs over a year before they land on their feet. When we believe in a candidate, we do all we can for them.”

Jon served his sentence at HMP Birmingham, which holds over 1000 men. Approximately 80% are on remand awaiting trial. It is a busy local prison, with many people being received, released, taken to court or transferred to other jails each day. Like most other prisons, only came away from 23 hours confined-to-cell in the spring.

The future of in-prison recruitment

Now Inside Job has a success system that can be replicated – and it doesn’t just work for the candidates. It’s a highly-developed ecosystem that has proved mutually beneficial for all parties involved.

“Getting someone employment is just the beginning. We support our candidates through everything- rehabilitation is not just about a job.

Jon is being released from HMP Birmingham this month and is walking 100 miles from the prison to his home city, Manchester, with his colleagues and an impressive list of supporters, which includes High Sheriffs, governors, prison officers and business people, to raise money for Inside Job.

“We’re calling it The Right Track- and I couldn’t think of anything better,” says Heather.

If you would like to donate to Inside Job or support the walk, please visit our GoFundMe page. 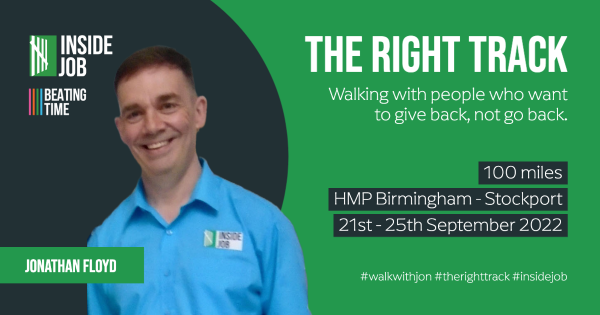